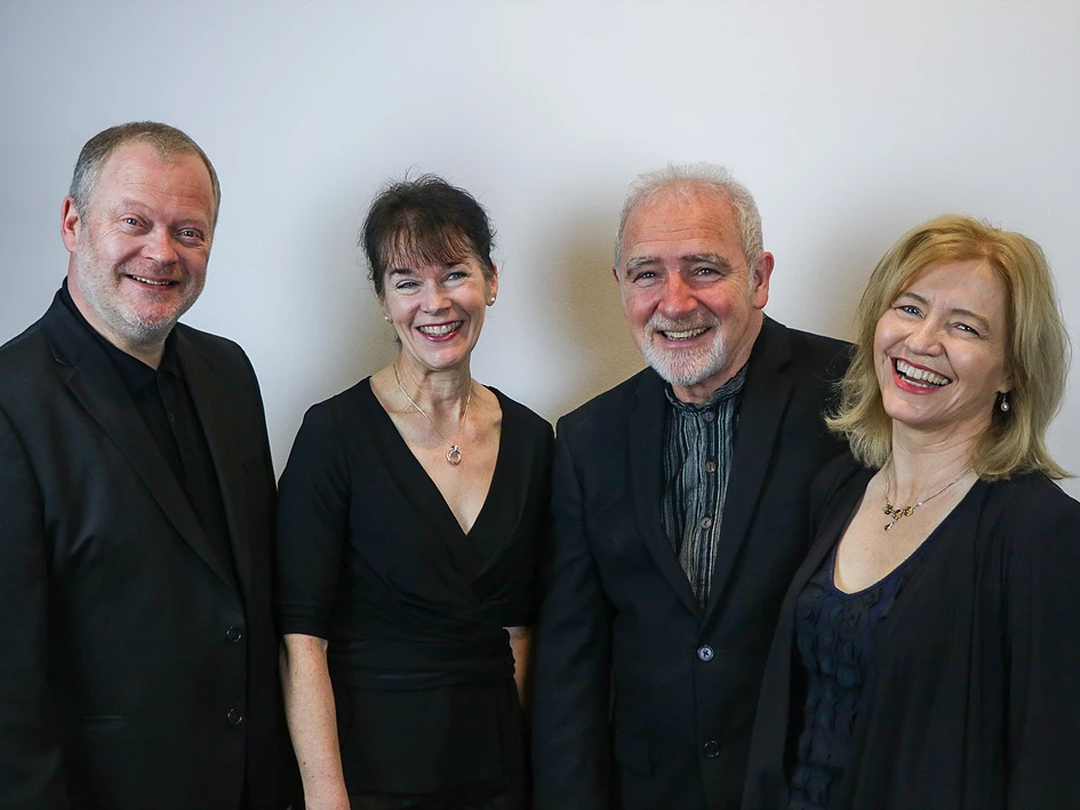 Taking their name from the great Russian violinist Adolf Brodsky (the dedicatee of Tchaikovsky’s violin concerto and a passionate chamber musician) the Brodsky Quartet have performed over 3,000 concerts on the major stages of the world and have released more than 60 recordings since forming in 1972. A natural curiosity and an insatiable desire to explore has propelled the group in a number of artistic directions and continues to ensure them not only a prominent presence on the international chamber music scene, but also a rich and varied musical existence. Their energy and craftsmanship have attracted numerous awards and accolades worldwide, while their ongoing educational work provides a vehicle to pass on experience and stay in touch with the next generation.

Throughout their career of over 45 years, the Brodsky Quartet have enjoyed a busy international performing schedule, and have extensively toured the major festivals and venues throughout Australasia, North and South America, Asia, South Africa and Europe, as well as in the UK, where the quartet is based. The quartet are also regularly recorded for television and radio with their performances broadcast worldwide.

Over the years, the Brodsky Quartet have undertaken numerous performances of the complete cycles of quartets by Schubert, Beethoven, Tchaikovsky, Britten, Schoenberg, Zemlinsky, Webern and Bartok. It is, however, the complete Shostakovich cycle that has now become synonymous with their name: their 2012 London performance of the cycle resulted in their taking the prestigious title ‘Artistic Associate’ at London’s Kings Place and in October 2016 releasing their second recording of the cycle, this time live from the Muziekgebouw, Amsterdam.

The Brodsky Quartet have always had a busy recording career and currently enjoy an exclusive and fruitful relationship with Chandos Records. Releases on the label include ‘Petits Fours’, a celebratory album of ‘Encore’ pieces arranged exclusively by the quartet for their 40th anniversary; a Debussy compilation; ‘In the South’, featuring works by Verdi, Paganini, Wolf and Puccini; ‘New World Quartets’, comprising works by Dvorak, Copland, Gershwin and Brubeck; the quartets of Zemlinsky, including the world premiere recording of his unpublished early quartet; two Brahms discs, featuring the iconic Piano and Clarinet Quintets; and the Complete Shostakovich Quartets.

As well as partnering many top classical artists for their performances and recordings, the quartet have made musical history with ground-breaking collaborations with some of the world’s leading artists across many genres and have commissioned and championed many of the world’s most respected composers.

Awards for recordings include the Diapason D’Or and the CHOC du Monde de la Musique and the quartet have received a Royal Philharmonic Society Award for their outstanding contribution to innovation in programming.

“The Brodskys showcased every nuance of their extraordinary skills. From their individual prowess to their near-telepathic sense of ensemble and their chameleonesque ability to inhabit the sound-world of any period, this was a performance that seemed boundless in possibility. But it was the more stripped back, though no less affecting, textures of Shostakovich’s profoundly moving eighth quartet… that fully revealed why this quartet is considered one of the world’s best.“
Sydney Morning Herald

“Very early on it became obvious that the Brodsky Quartet is made up of supreme talent. Their cohesion and perfect blending were inspiring as they passed the lead from one to the other in seamless transition.“
Limelight Magazine

“The performances as a whole achieve a rare degree of intensity’
‘Perhaps the most impressive aspect of these recordings [the complete Shostakovich Quartets for Chandos] lies in the huge range of dynamics and timbres that are employed to project the somewhat bewildering sequence of emotions that emanate from Shostakovich’s musical argument..“ (5* awarded for performance.)
BBC Music Magazine

“…Anyone who knows the Brodskys would have been surprised had their performance not been top drawer, penetrating the heart and soul of a work that, like so much of Tchaikovsky’s music, has a strong sense of autobiography. The fantastic and deeply moving account of the work by this great group did all of these things… that music drew something very special from these peerless players: they were deep beneath the surface, right in the engine room of the soul of the music…“
The Herald (Scotland)

“…But the thing happening at the moment which is SO extraordinary is a cycle of the complete Zemlinsky string quartets given by the Brodsky Quartet… I was captivated. I had only ever heard this piece on disc – nobody seems to play it live – and I was unprepared for the dimension of its impact, fabulously done here by the Brodskys at their best. The finest playing I’ve encountered in a long time: fiercely focused, blazing with integrity, and brilliantly imagined…“
Daily Telegraph

“Performing the complete cycle of [Shostakovich’s] 15 quartets over two days, the Brodsky Quartet displayed total certainty in the trajectory of the journey … this supremely assured series of performances … as gripping as they were unsettling.“
The Guardian

“The Brodsky Quartet is the no.1 interpreter of Shostakovich in the world today.“
Corriere della Sera

“…The Brodskys hold clarity and passion in fine balance in the [Brahms] C minor quartet, while in the thrilling F minor quintet, the Ukrainian pianist adds an effective bite to the often clamorous texture from the off.“
Sunday Times

“…The famous four… constitute simply one of the best string quartet groupings in the world. They are justly acclaimed for their polish, sophistication and a mature refinement to which almost every group, in a music world stuffed with new string quartets, should aspire…“
The Herald (Scotland)

“The Brodsky’s ability to communicate on so many levels – humanity and virtuosity all part of the essential integrity of their approach – promises to make this a memorable cycle.“
The Guardian

“Throughout, the players gave unstintingly of their passion and energies, playing with a spirit so transformational you felt they were actually improving the world. Had it not been for dry concert conventions, they would surely have called a lock-in and played through the night.“
The Strad

“The Brodskys took the audience on an emotional roller coaster of a ride, with highs, and lows, tensions and dissonance, but also with long passages of beguiling beauty . Everyone could take something from their playing and the audiences did just that, They were extremely attentive and enthralled at the end… It was one of the most exciting evenings in Dornbirn Klassik in recent years.“
Kronenzeitung

“The Brodsky Quartet is not just a great group. It is a genuine phenomenon…“
The Herald (Scotland)

“It’s warming to be immersed in the Brodsky Quartet’s tender music-making… their close interaction has a ballet-like beauty.“
Svenska Dagbladet